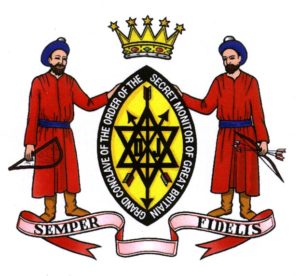 The Order of the Secret Monitor (OSM) in Norfolk consists of eight Conclaves which have a similar basic set up to any Masonic Lodge (by whatever unit name may be applied – in OSM it is a Conclave). The Conclaves are ranged across the County of Norfolk and located in Norwich, Wroxham, Great Yarmouth, Aylsham, Dereham, King’s Lynn and one moves around the available masonic venues in the Province.

Membership is around 217, and growing steadily. Meetings are generally 3 per year and regalia is minimal, so the cost of membership is relatively low.

The Annual Provincial Meeting is held in Great Yarmouth in July and is usually very well attended.

The Order continues the charitable trend, which is present in all Masonic Orders and at this year’s Annual Meeting we shave invited the Lennox Children’s Cancer Fund to send a representative to receive a donation from the Province of a figure in excess of £5,000 – a very substantial contribution to the work of the charity thanks to the generosity of the members.

Norfolk is a happy place to be in all Masonic Orders but we are especially pleased to be able to say that for friendliness and support the OSM is very hard to beat.

The Annual Meeting of the OSM Provincial Grand Conclave in Great Yarmouth was held on 27th July.  It was very well supported by Norfolk members and Visitors from other Provinces and Heads of other Orders in East Anglia

We were in our usual venue in Albert Square, Great Yarmouth for the 2015 Annual meeting of the OSM. An enjoyable day was had by all who attended.