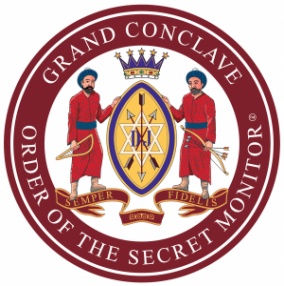 The Order of the Secret Monitor, which developed from a still more ancient degree, is the Brotherhood of David 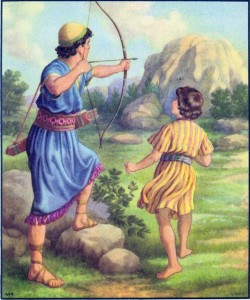 and Jonathan and is in its way older than Freemasonry itself. Its principles and its watchwords being founded upon those grand examples set by two worthy Hebrew Princes around 1000 years BC and as recorded in the Jewish history of the Bible.

This is a society framed upon the principles of mutual trust, watchful brotherly care, of warning in time of danger; solace in time of sorrow; together with skillful and effective friendly advice in every circumstance of life: A Society which meets a great and crying need in human affairs and is calculated to benefit those who act upon its tenets.

If a Brother should be in sorrow the Conclave will afford him sympathy; if in danger his Brethren will give him assistance; if in distress the Visiting Deacons will bring him consolation; if in poverty he will find aid.

Within Craft Freemasonry we are taught, at an early stage, that it has for its principles, ‘Brotherly Love, Relief and Truth’. In no Order in Freemasonry, other than that of the Order of the Secret Monitor, can there be found a greater emphasis on those fundamental Masonic Virtues, for the teaching of those principles are a dominant part of our Ceremonial and Ritual, and enables us to put them into practice.

The Order consists of three degrees; Secret Monitor is first and comes from the first Book of Samuel. The theme is friendship and fidelity.

The second is the Princes degree. It tells the story of how a Brother was given refuge after escaping death and again lays stress on friendship and fidelity.

The third degree is that of the Installation of the Conclave Supreme Ruler. What is unique is that in addition to the Installation there is a further ceremony called Commissioning which gives rank and status throughout the entire Order.

When inducted into a Conclave a Candidate will receive a Jewel suspended from a ribbon of Purple and Yellow, which is replaced on completing the Second Degree by Yellow and Purple as shown.

The colours used for the two Degrees are the same but the order on the ribbon is reversed for the Second Degree.

Because we try and complete the Second degree without undue delay, the Jewel for the First Degree is lent to the Candidate in many Conclaves, which avoids any regalia expense until the Second Degree is taken.

Conclave Officers wear a Red Sash for the work in the First Degree.

Conclave Officers wear a Sash with different colouring for the Second Degree.

The insignia of the Order and the Rank attained are embroidered on it in Gold wire.

The insignia of the Order, a gold crown and the Rank are all embroidered in Gold wire.